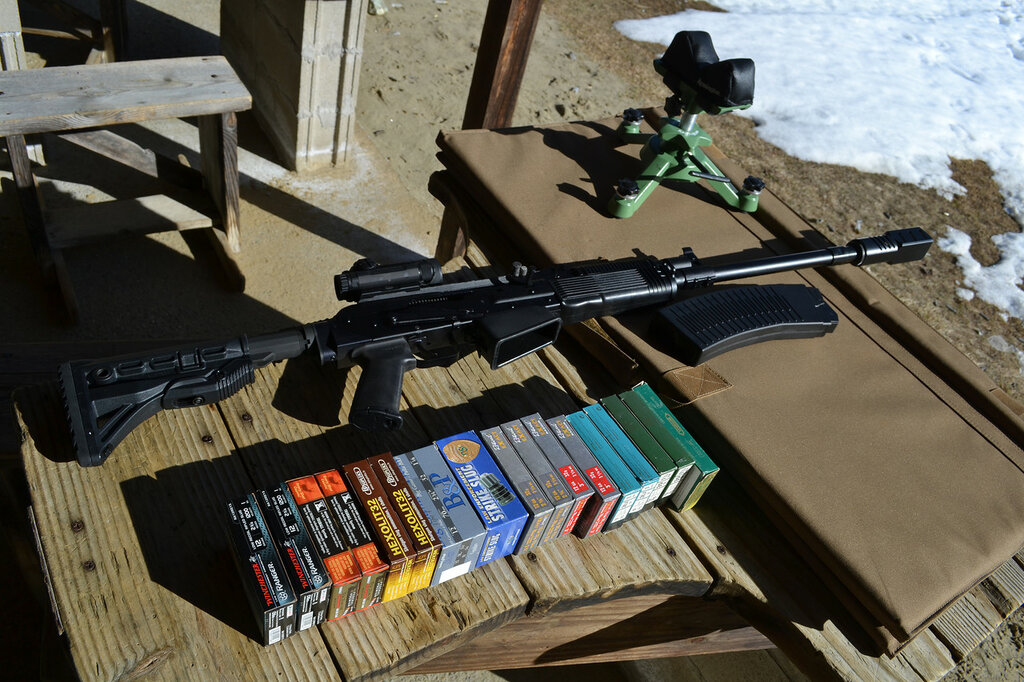 The goal of this test was to compare a variety of different slug designs for accuracy from the Vepr-12 at 25 yards (23 meters) and then to select the best performing slugs and test them again at 100 yards (91 meters). This test provides a comparison to an earlier test that used the same shotgun without a muzzle brake and choke, to see what affect adding these muzzle devices would have on accuracy. Additionally, some new slug types were tested in the hope of improving performance at 100 yards.

The shotgun used was a Molot Vepr-12 modified with a 0,5 M choke, a GK-02 muzzle brake, a Mako recoil-reducing stock on a Canis stock adapter, and a Magpul pistol grip. An Aimpoint CompM4 red dot non-magnifying optical sight was used for the testing. Otherwise all parts were factory original.

Since a baseline for accuracy had already been established with this shotgun in the earlier test, I decided to fire one five-shot group from a rest at 25 yards, and then a second five-shot group at 100 yards, instead of shooting three consecutive groups at each distance as I had done in the first test. This allowed me to identify the most promising slug designs, as well as reducing costs, which were quite high for some of the slugs. Using this protocol, I was able to complete the testing in a single range session. The temperature at the time of testing was 6 C, with full sun and a light wind gusting up to 15 kph. 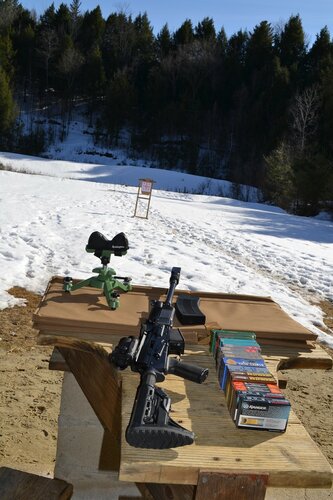 A view down the testing range. 100 yard targets are behind the far berm. 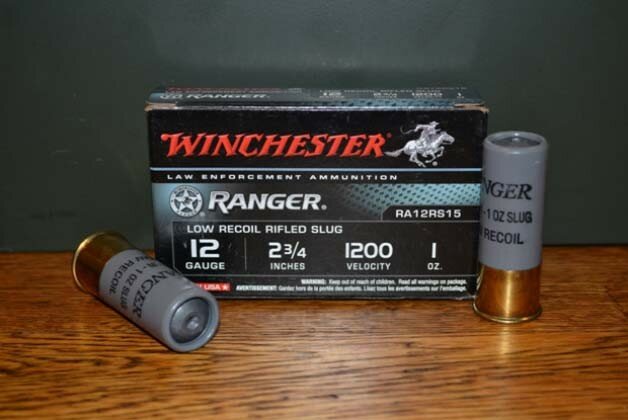 These are the slugs I normally use in 3-gun competition, and they have performed well for me at distances under 50 meters. Recoil is very mild. I used these slugs to sight in the Vepr-12 for this test. At 25 yards, my group measured 9 cm, 50% larger than the 6 cm average without the choke and muzzle brake. I did not test these slugs at 100 yards this time. 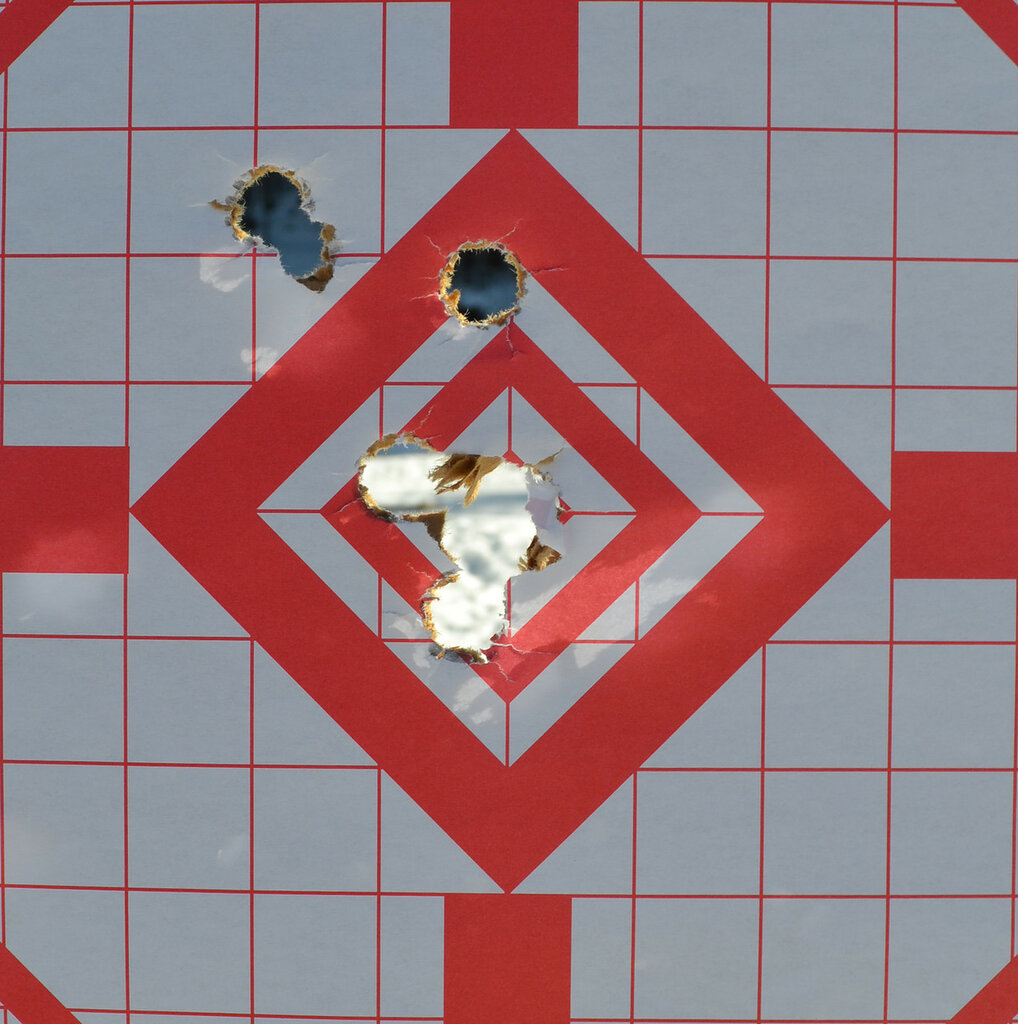 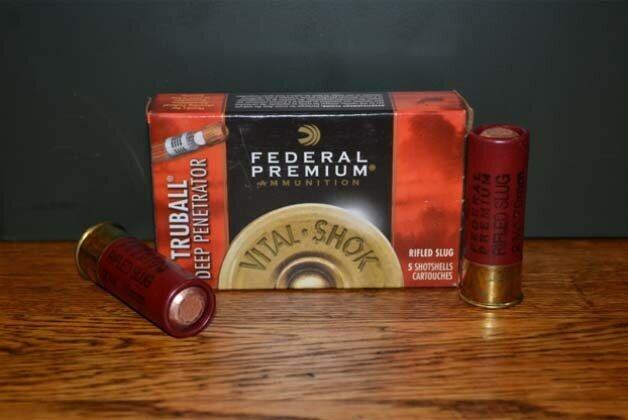 These slugs use a copper-plated lead projectile with a plastic ball inserted into the base which is supposed to help them expand to fit the bore of the shotgun and improve accuracy. They have a good reuptation for accuracy, but as in the first test, they were less accurate than the other top performing slugs, so I only tested them at 25 yards this time. The group size with these slugs was 15 cm, almost three times larger than the average without the choke and muzzle brake. What looks like an extra hit on this target in this photo was caused by the plastic ball in the base of one of the slugs separating and striking the target. 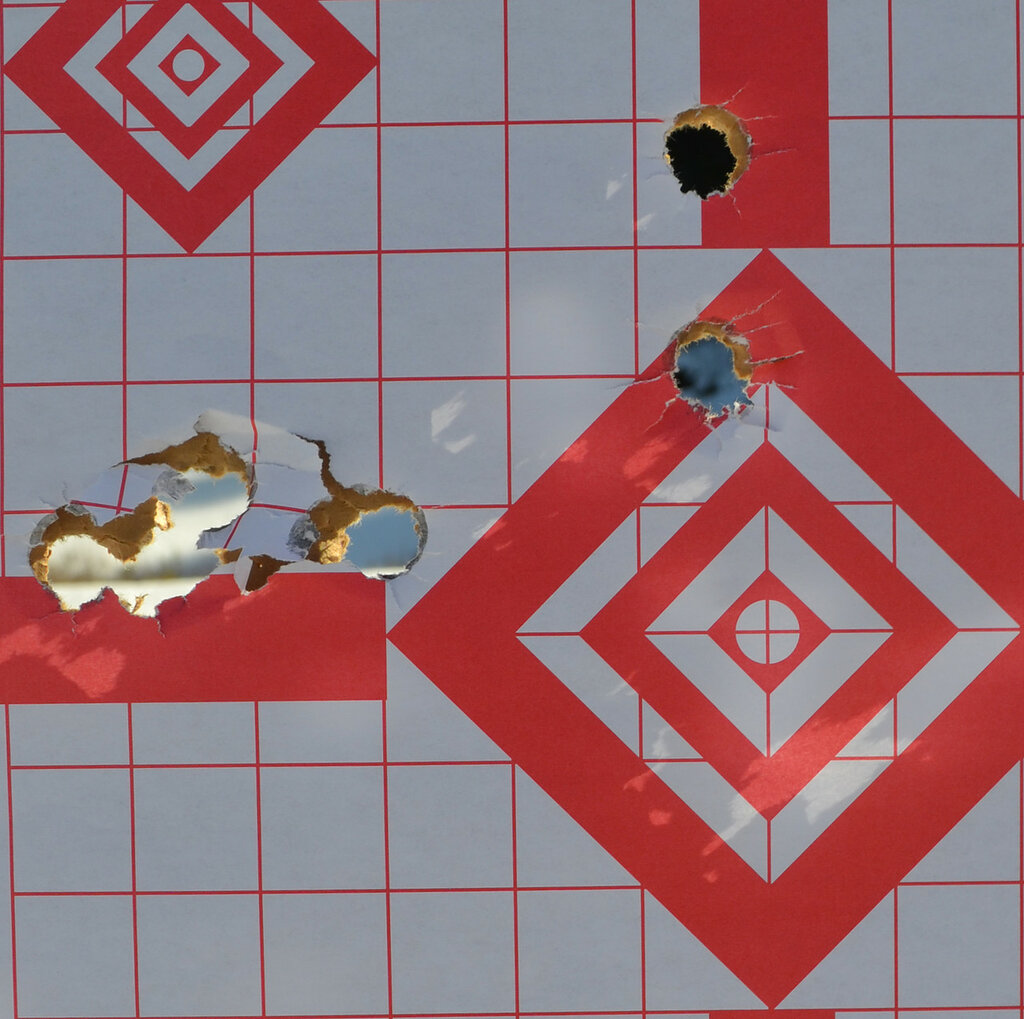 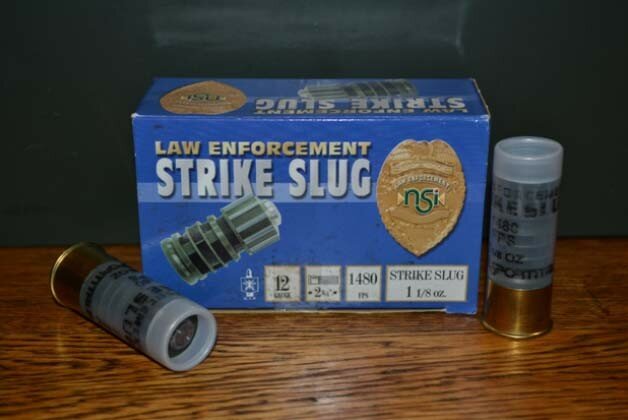 These slugs use a plastic wad that remains attached during flight, and have fairly heavy recoil, as you would expect from a load with a power factor over 700. The NSI slugs are by far the worst performing slugs I have ever used in any shotgun. In the first test their accuracy was very poor, with an average group size of 13 cm; with the choke and muzzle brake added, they were virtually useless. At 25 yards, of five shots fired, only one impacted a target measuring 40×40 cm! Needless to say, I did not test these at 100 yards. 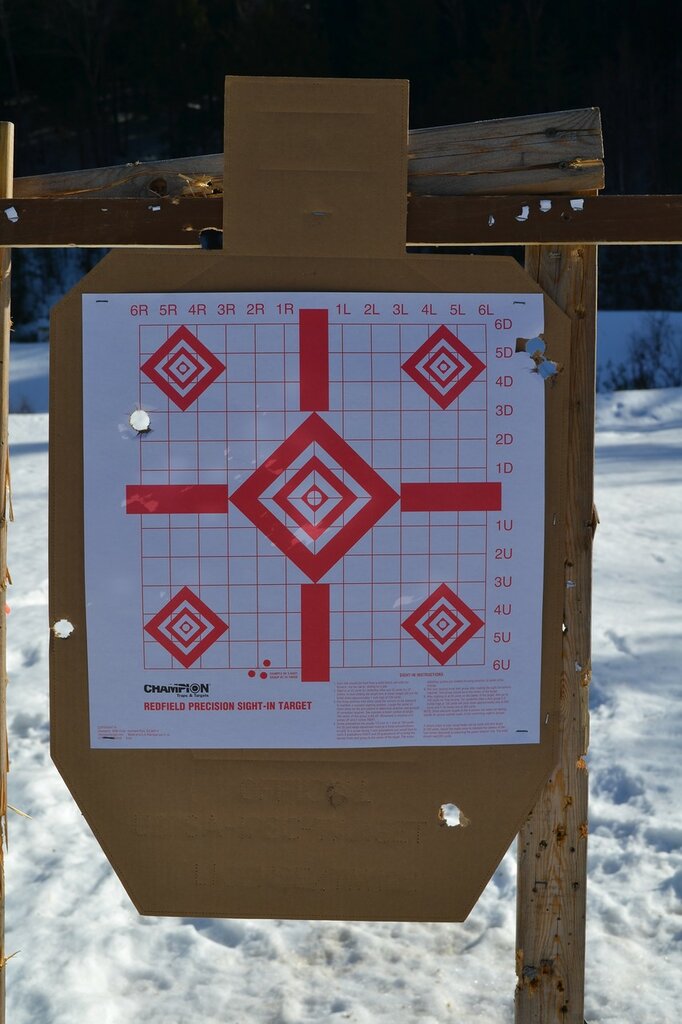 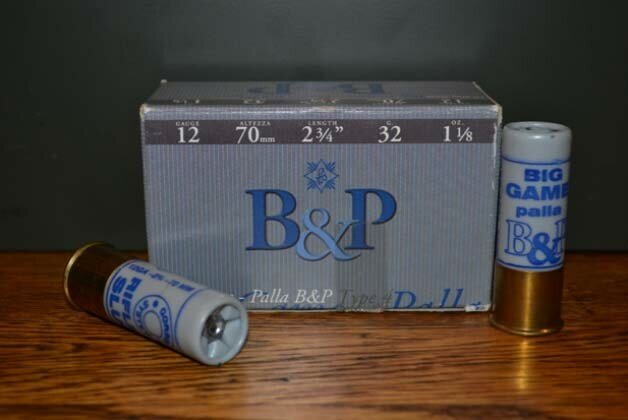 The B&P Palla slugs are an Italian design with an attached wad intended for big game hunting. These are a powerful slug, with recoil to match. In the first test they proved to be one of the most accurate designs, with an average group size of just 3.5 cm at 25 yards, but with the choke and muzzle brake added their 25 yard group size measured 8.5 cm, more than twice as large. I did not test them at 100 yards this time. 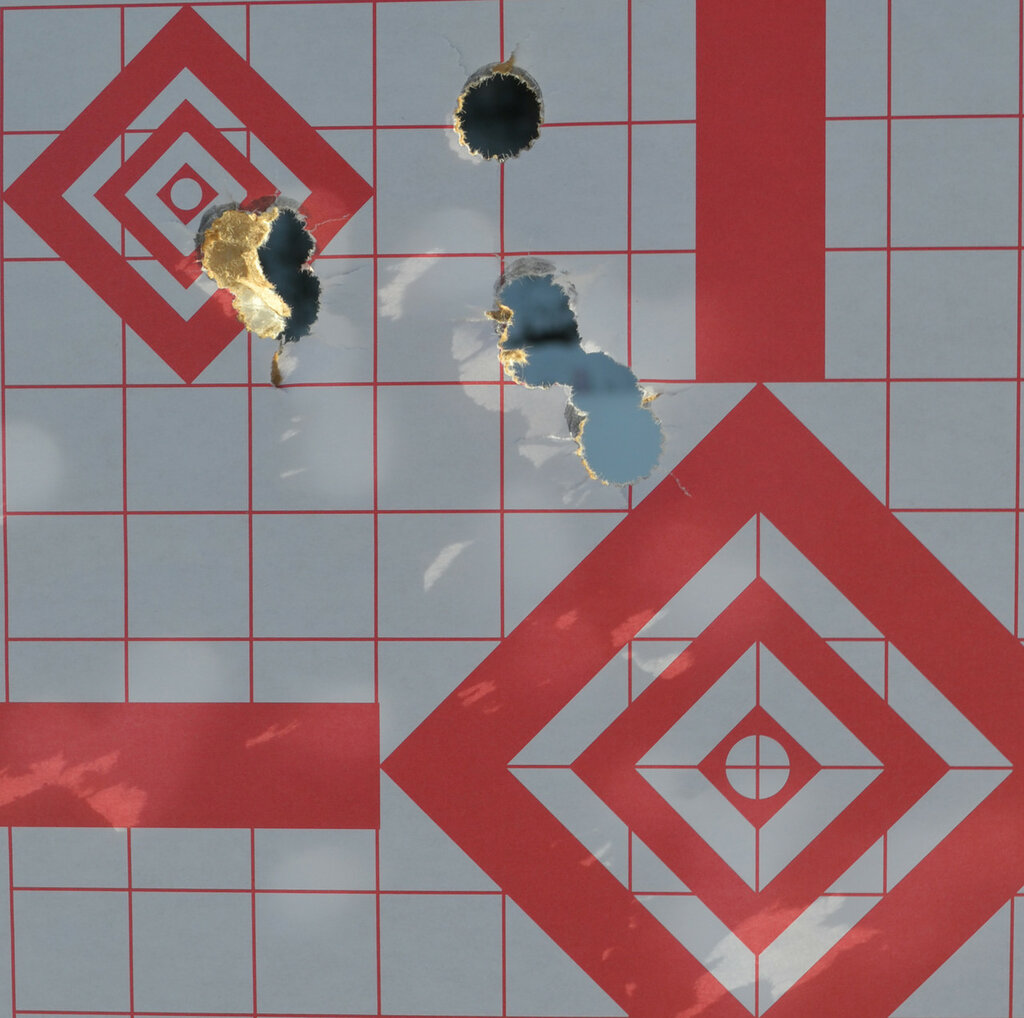 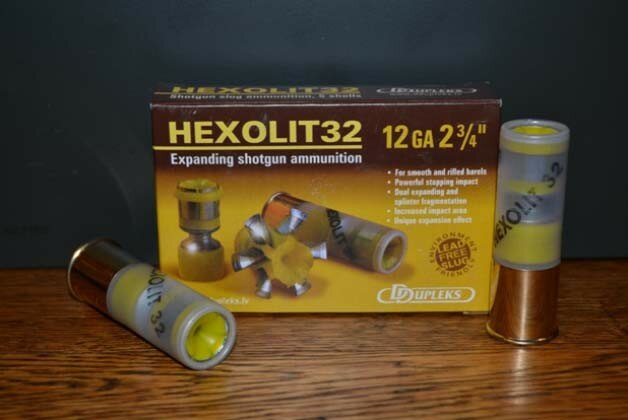 The DDupleks Hexolit32 slugs are an unusual design from Latvia, and proved to have good accuracy. These slugs are machined from a solid piece of steel, and are designed to expand and fragment on contact with the target to increase lethal effect for hunting. Hexolit slugs seemed to have slightly less recoil than lead slugs with similar weight and velocity, possibly due to less bore friction because of their method of construction. In the first test, the Hexolit slugs exhibited exceptional accuracy at 25 yards, with an average group size of just 3 cm, but with the choke and muzzle brake added the group size increased to 5.5 cm. At 100 yards in the first test, the Hexolit slugs averaged a group size of 21.5 cm with four shots on target at 100 yards; with the choke and muzzle brake, once again only four shots impacted the target, with a group size of 28.5 cm. 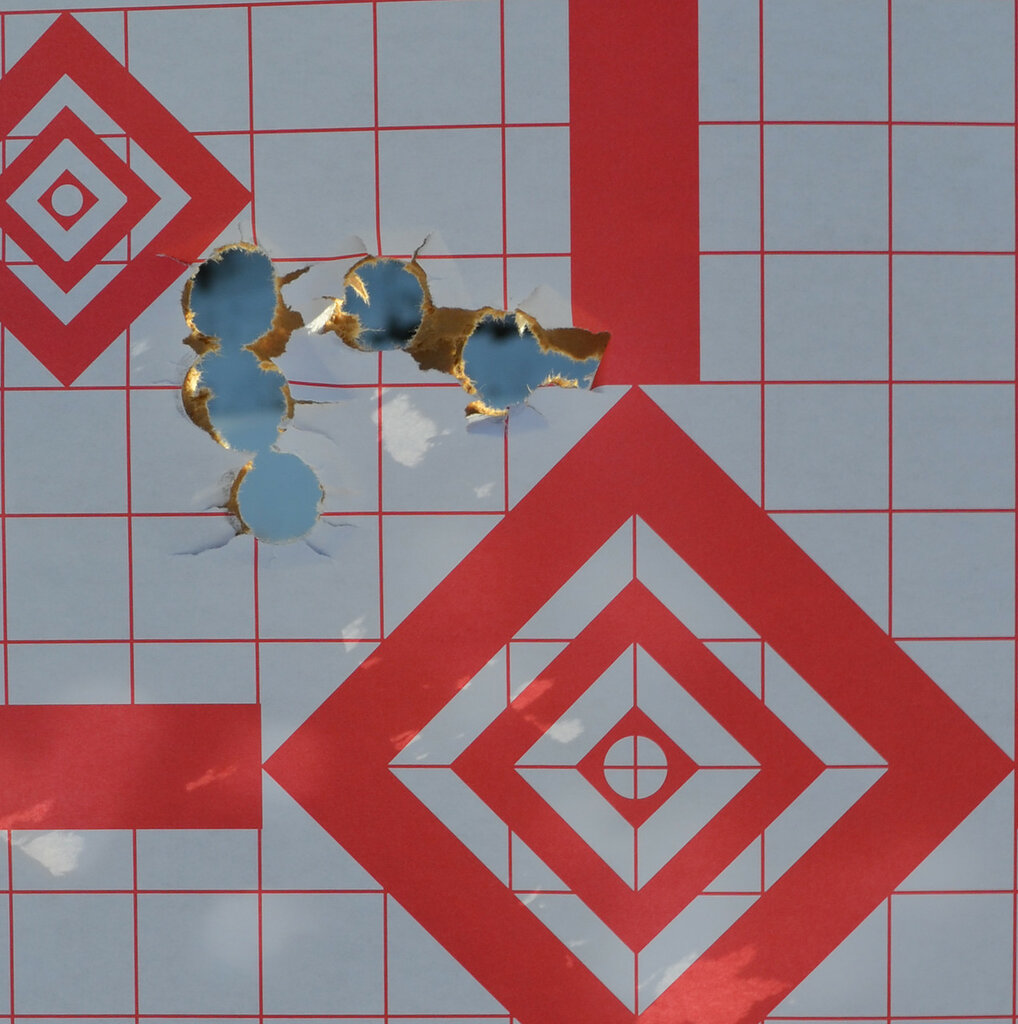 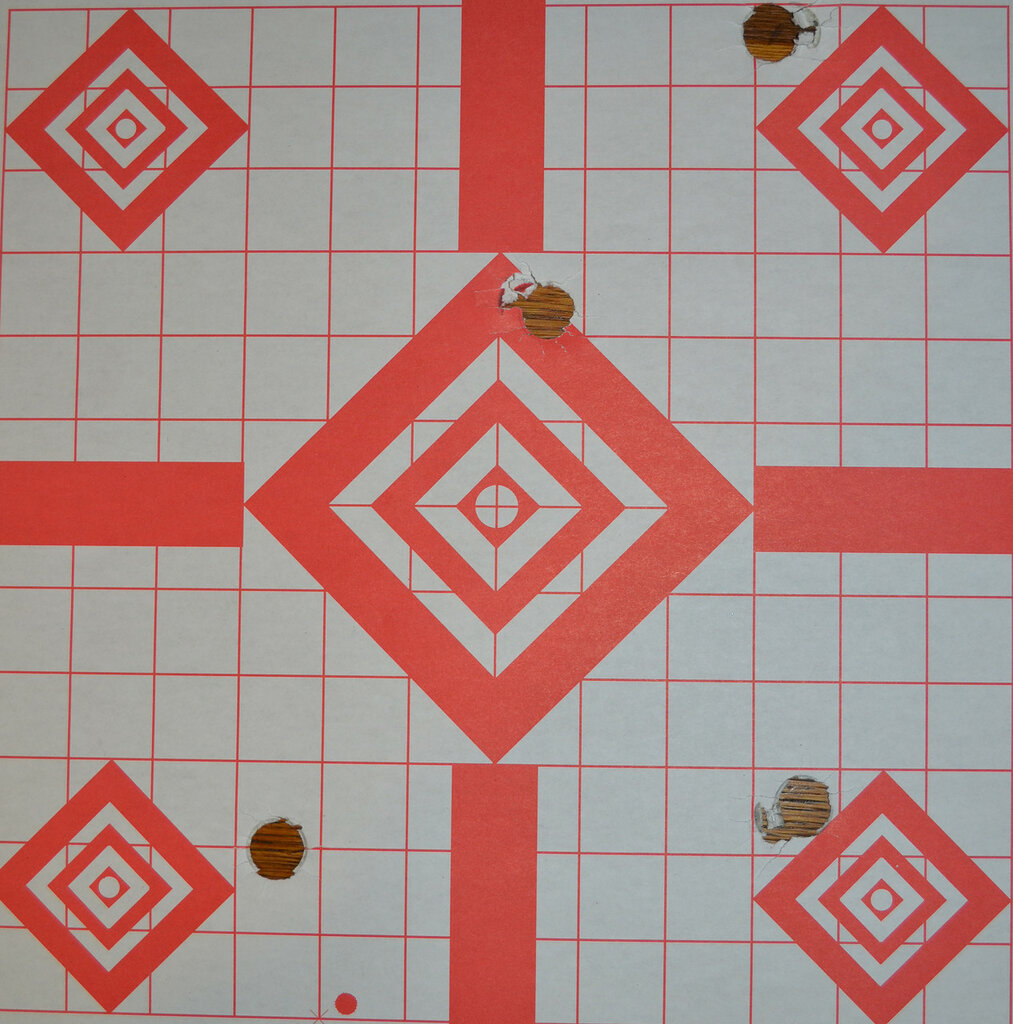 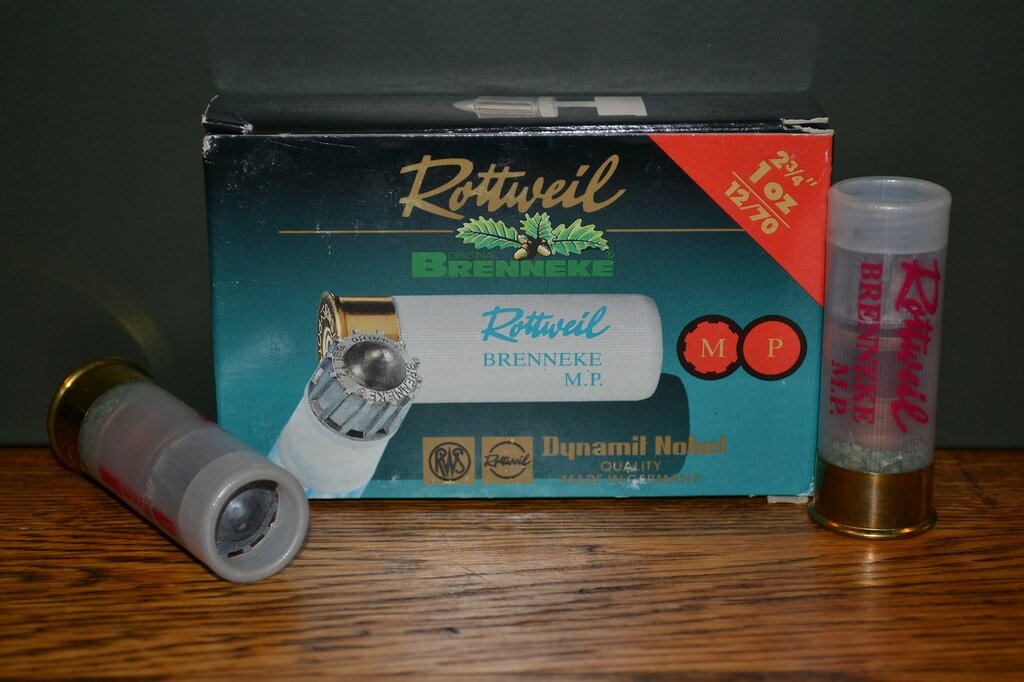 Brenneke slugs are a German design using an attached plastic wad that have a good reputation for accuracy and power. I did not test these in the first test, but acquired some for this test hoping they would prove to have good performance at 100 yards. At 25 yards, these slugs produced a group of 8 cm. At 100 yards, three out of five shots impacted just left of the target. Including those shots with the two rounds on target gave a group size of 21 cm. 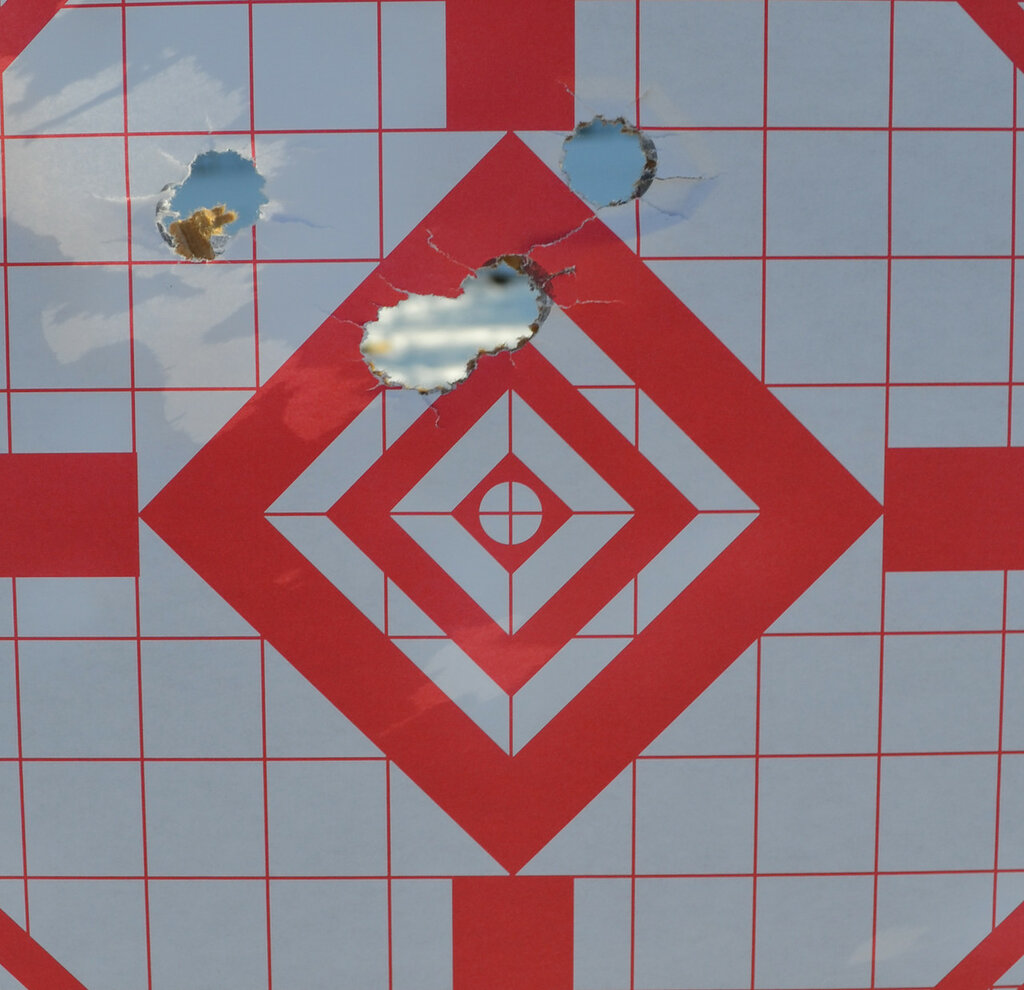 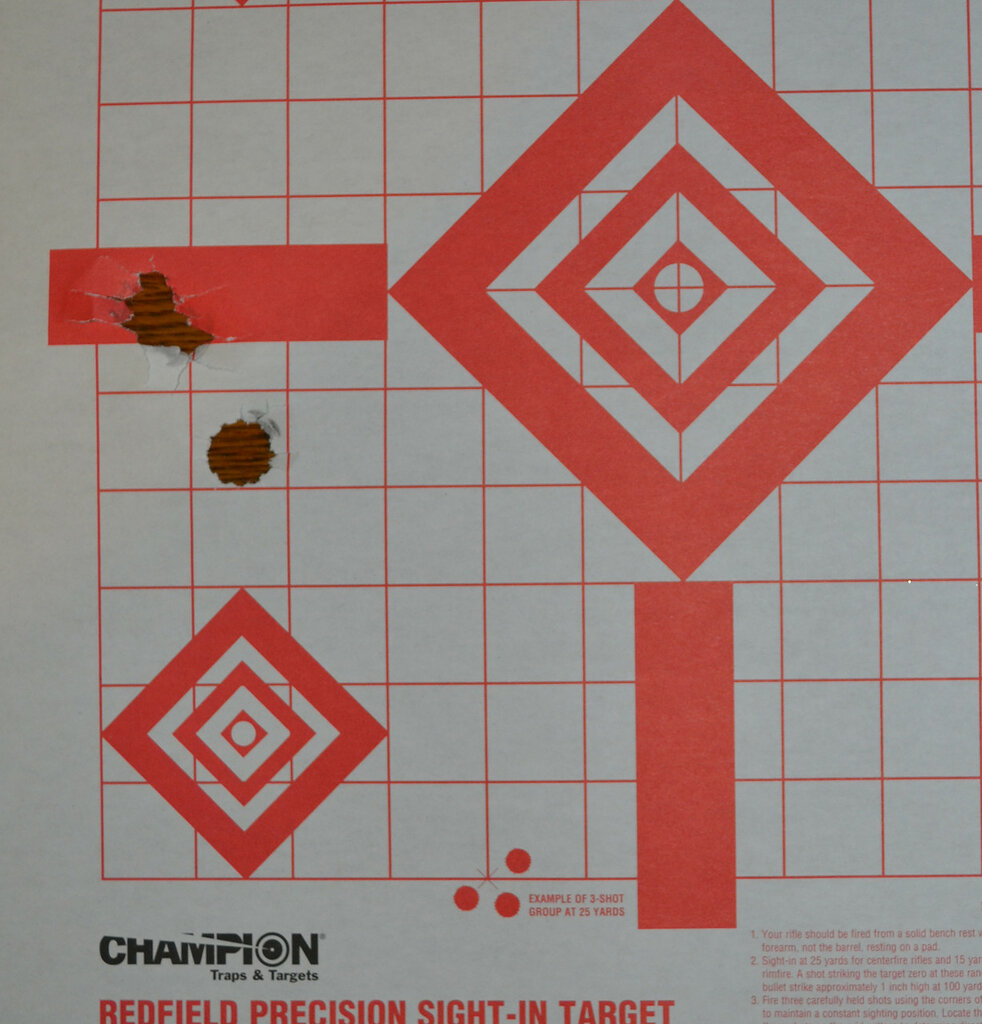 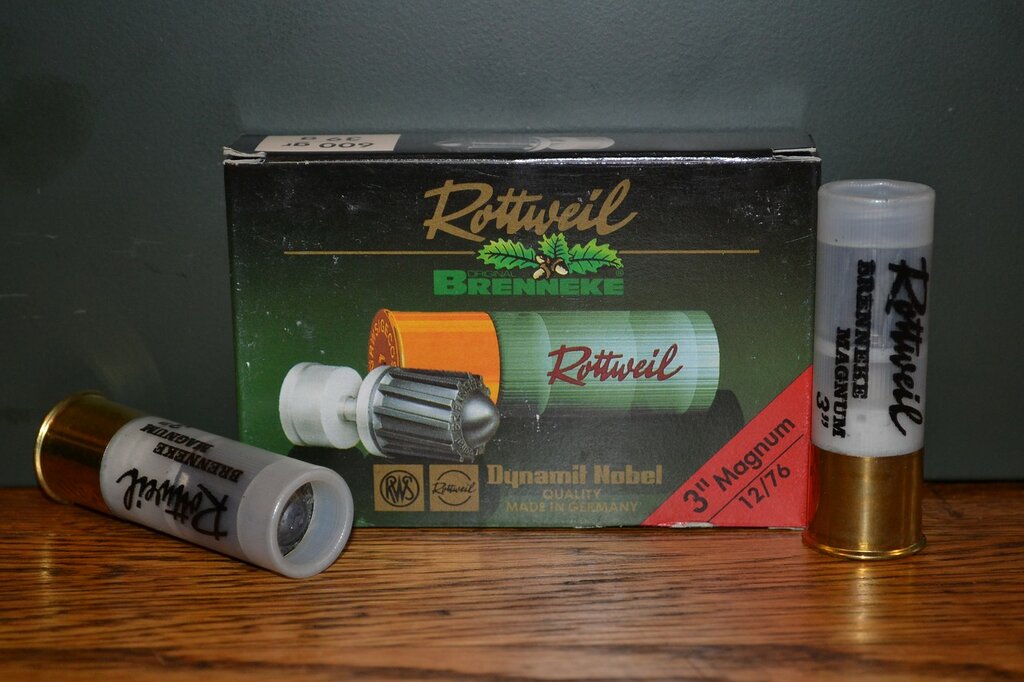 Brenneke 76mm magnum slugs are real monsters, using a hardened lead alloy and extremely heavy slug at high velocity, and are designed for hunting heavy game animals. They are also used by police to stop vehicles by firing into the engine block; in Iraq and Afghanistans, US soldiers have used them for disabling vehicle-born improvised explosive devices using the same technique, and also for detonating roadside bombs from a distance. This performance comes at a cost of about $2.50 per shot. In a pump action shotgun the recoil generated by these slugs can be unpleasant, but in the Vepr-12 with muzzle brake and recoil-reducing stock I found them very manageable to shoot. I did not test these in the first test. Of all slugs tested these shot the closest to point of aim at both 25 and 100 yards. At 25 yards, group size was 8.5 cm, at 100 yards, group size was 18 cm. Althogether a very impressive slug with excellent performance, although it did have the heaviest recoil of any slug tested. 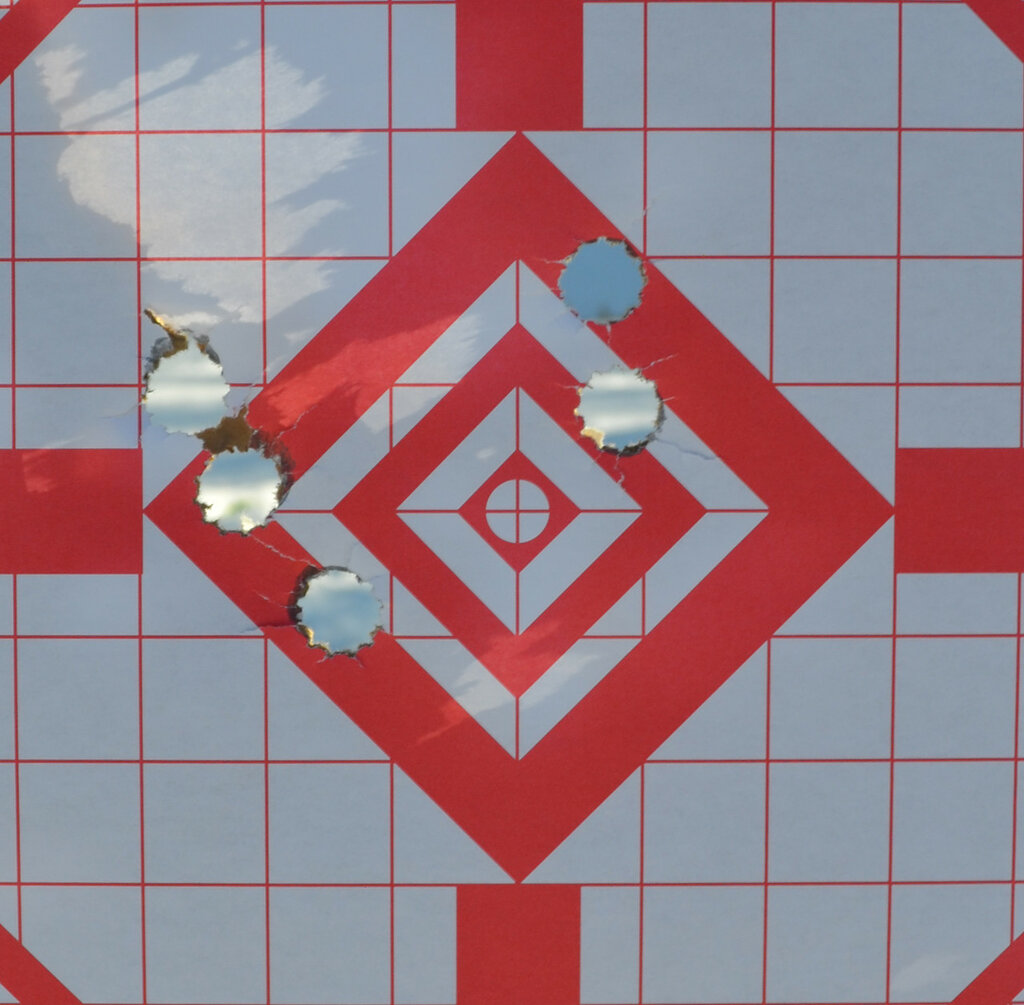 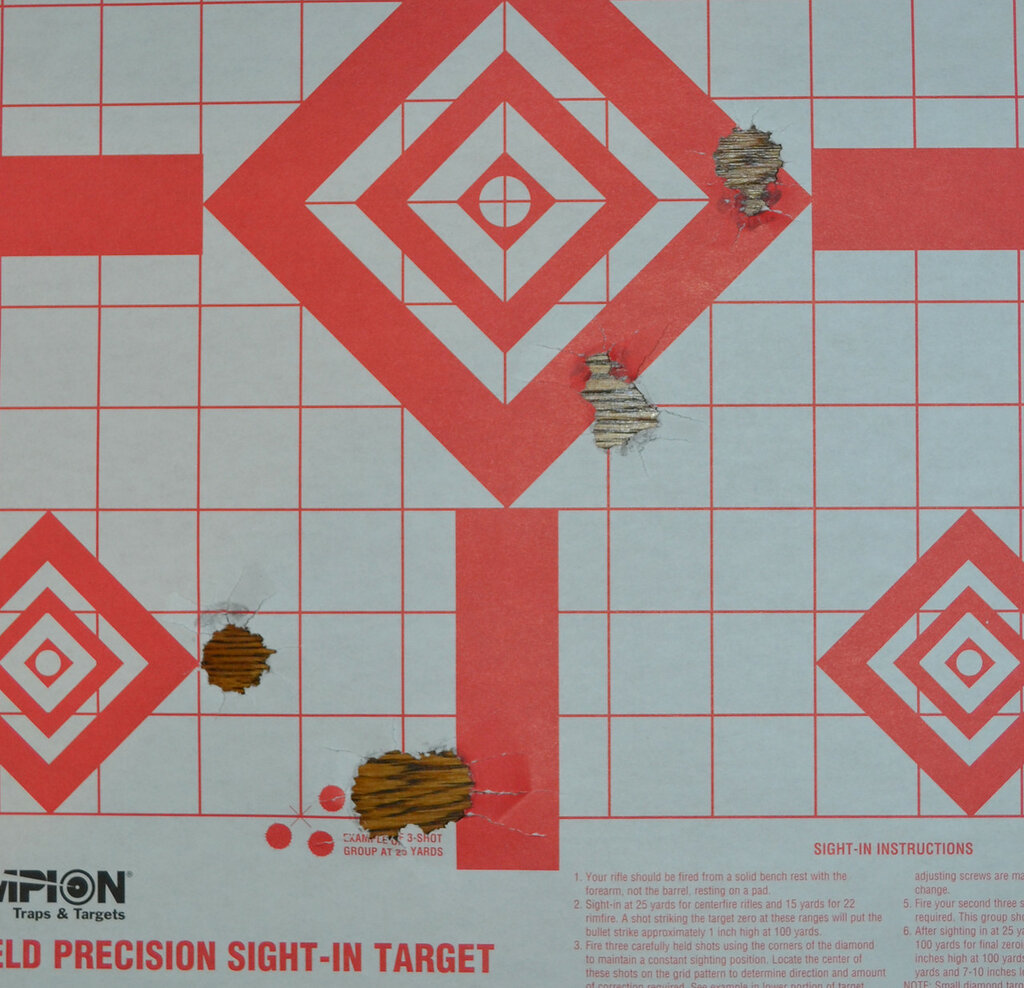 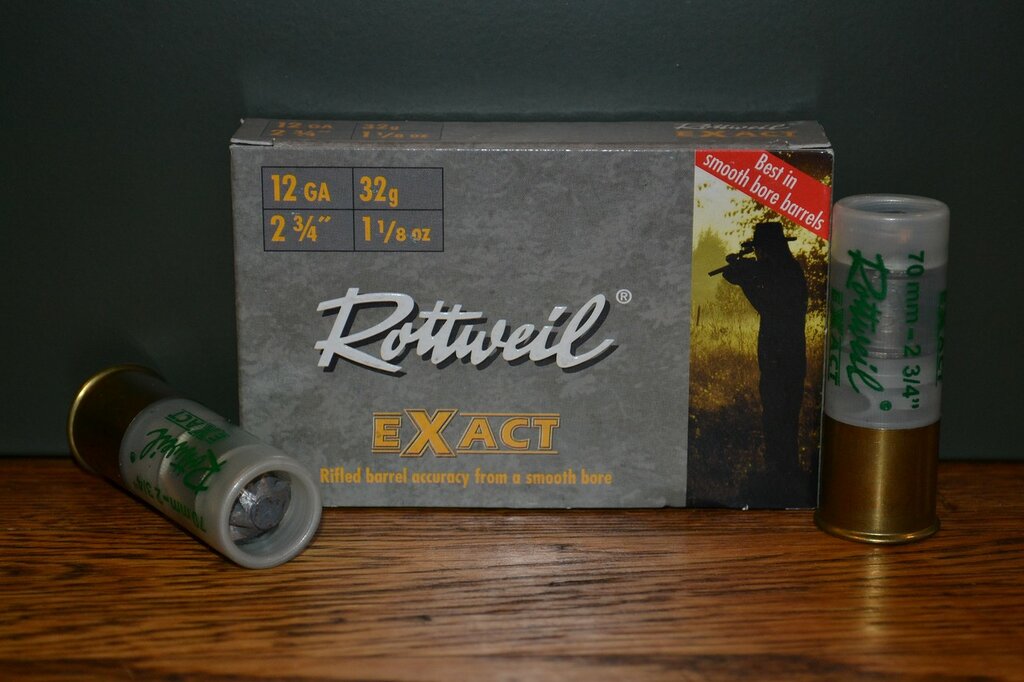 Another German slug, Rottweil Exact slugs claim «rifled barrel accuracy from a smooth bore» using a Gualandi-type slug. These slugs seemed to have lighter recoil than I would have expected considering their weight and velocity, and also proved to be the most accurate of any tested. Unfortunately, I did not have any of these for the first test. At 25 yards, these slugs produced a group of 3.5 cm, and at 100 yards, they produced a group of 11 cm. These impacted higher than expected at 100 yards, with the group straddling the border between two targets, but I believe that when properly sighted in, they would make an outstanding choice for long-range shooting. Given the performance these displayed, they are going to be my choice for long-range slug shooting with the Vepr-12 from now on. 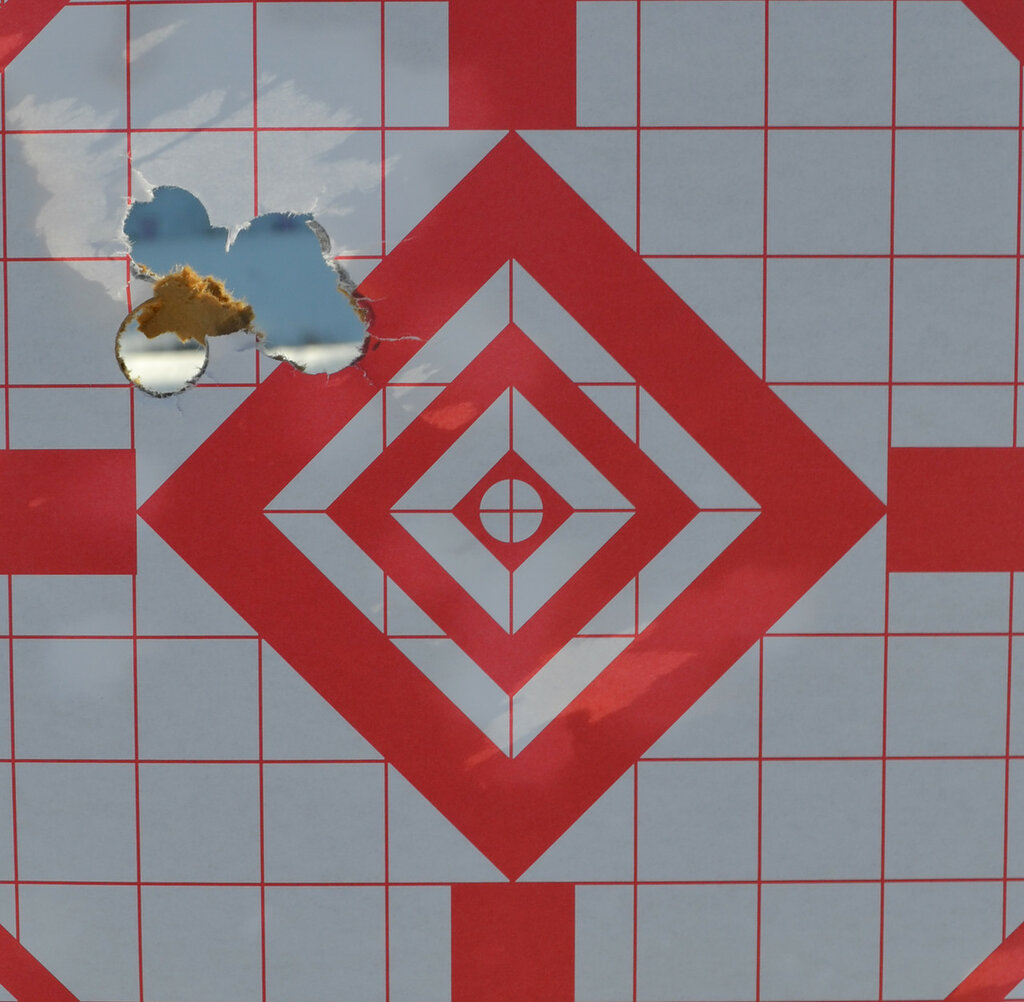 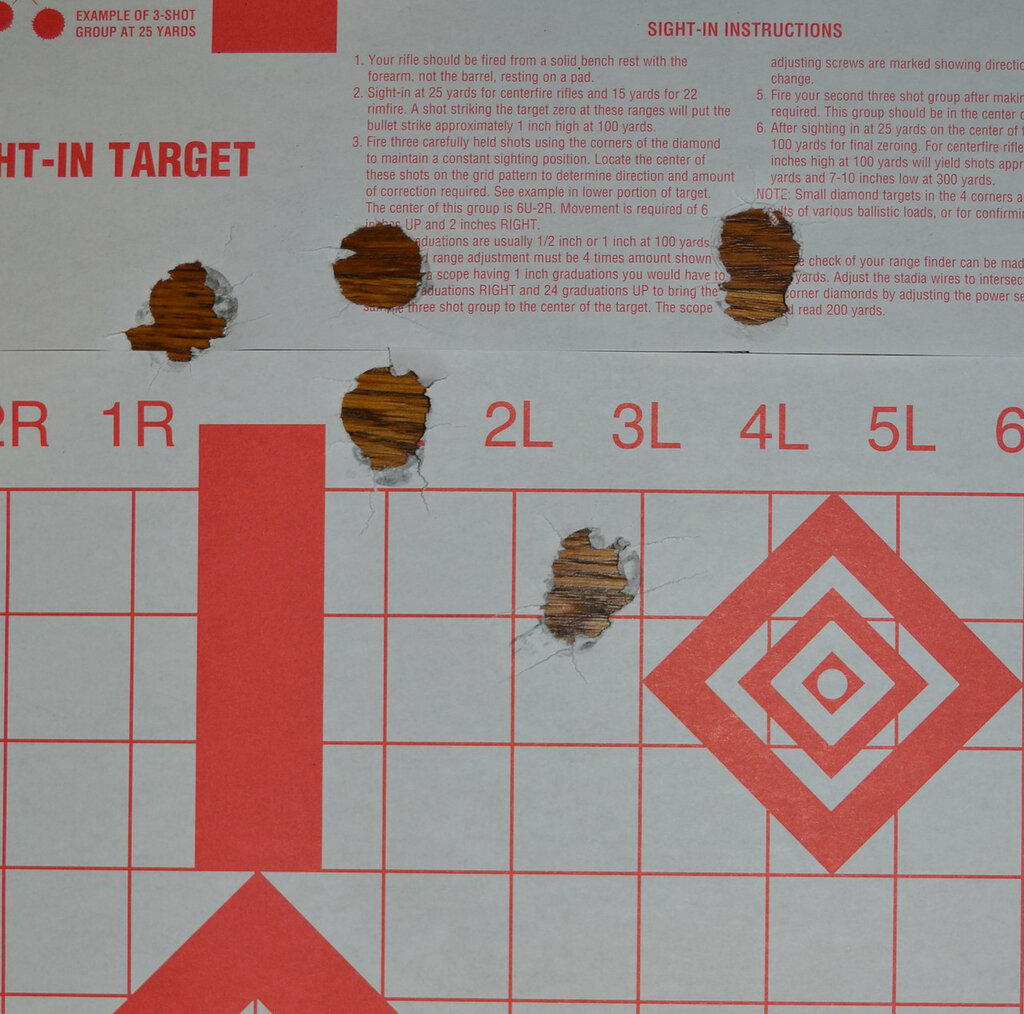 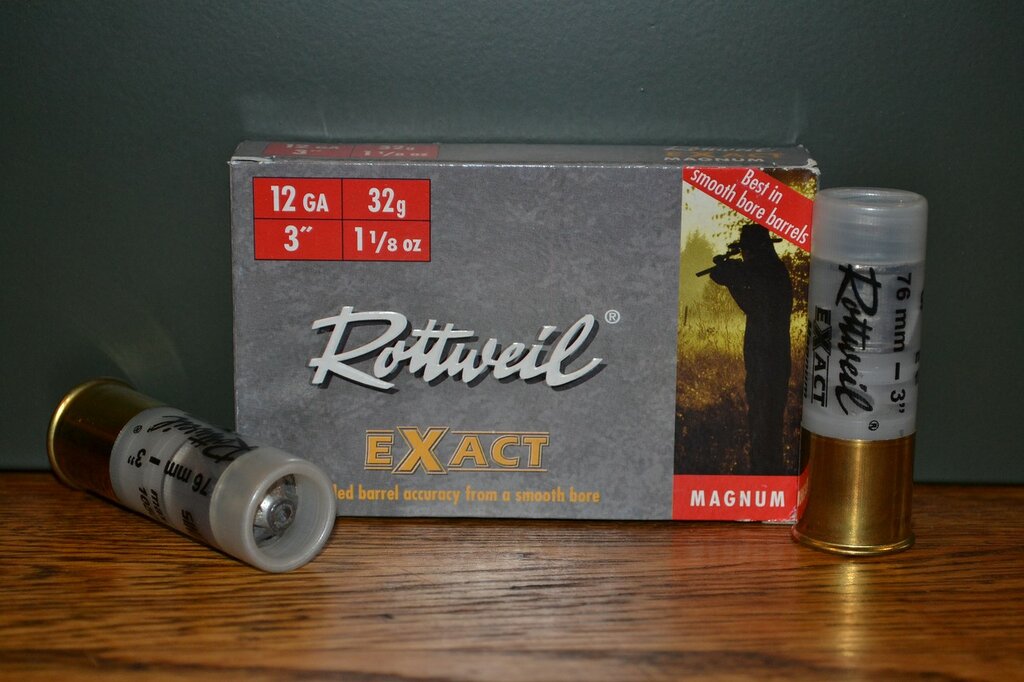 The 76 mm magnum version of the Rottweil Exact slugs, these also showed excellent accuracy, although they did not group quite as well at 100 yards as the 70mm Exact slugs. These also were not tested in the first test. Recoil was heavy with these, as expected. At 25 yards, these slugs produced a 3.5 cm group, and at 100 yards they produced a group of 19.5 cm 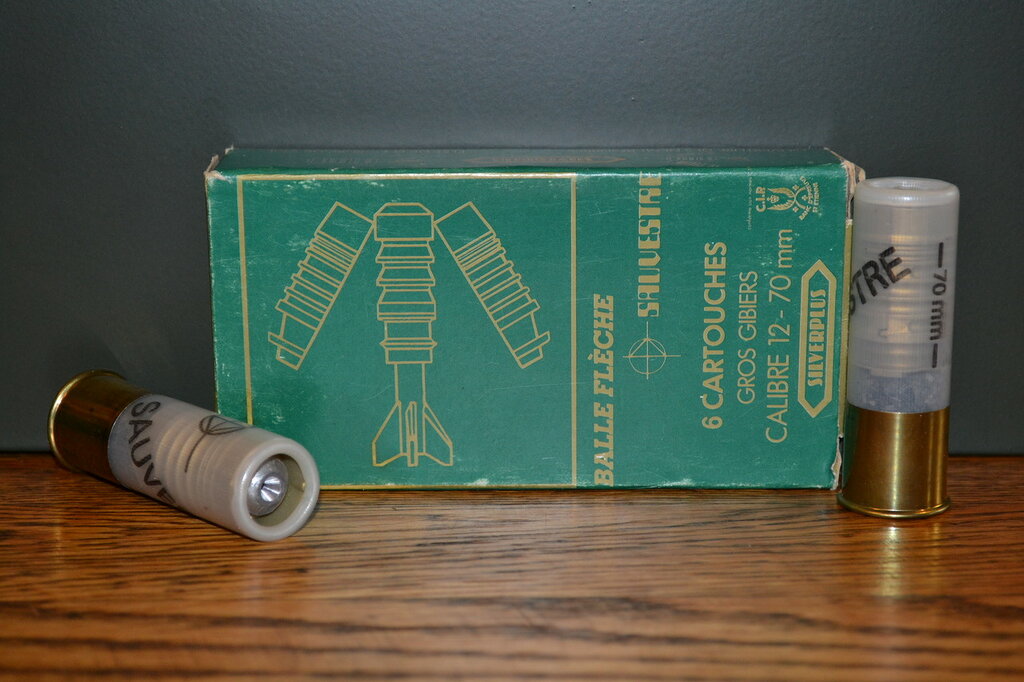 The Sauvestre Balle Fleche slugs are a French design, and are the most innovative of any of the designs tested. They use a fin-stabilized slug made of lead around a steel core with a discarding sabot, a similar technology to that used by most modern military tank rounds. These slugs are supposed to produce great precision from smoothbore barrels, but are quite expensive. In the US they are no longer imported and are now collector’s items, but I decided to use one box from the several I purchased when they were still available for this test. New, these slugs cost about $6 apiece; now that availability is very limited the price is upwards of $10 a round so I did not want to shoot more than one box. Because of my limited inventory, I tested these a little differently from the other slugs. They come in boxes of six, so I fired one shot at 25 yards to see where they struck compared to the point of aim, and then used this as a reference to fire a five-shot group at 100 yards. These slugs hit very low compared to all the others tested at 25 yards. Estimating a holdover at 100 yards, I managed only one hit on the target, although the other four slugs all hit just to the left in the backer, producing a total group size of 28 cm. I was a little disappointed with this result, but it’s possible it would have been better using a shotgun without a choke or muzzle brake, and without having to estimate a point of aim. Interestingly, all of the holes these slugs produced at 100 yards were perfectly round, indicating they were still perfectly stabilized. Probably these slugs are best left to collectors or hunters with a dedicated slug gun for long-range shooting, but it was still interesting to try them out. 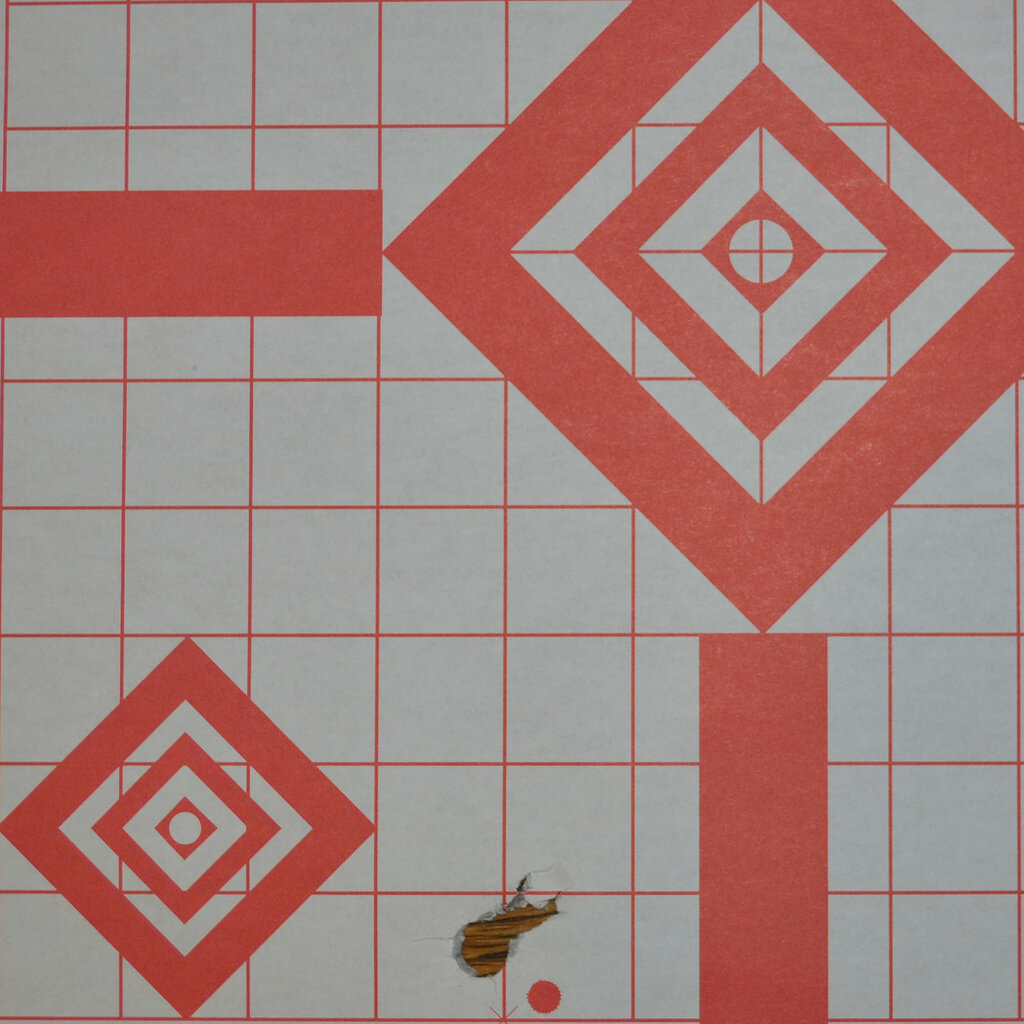 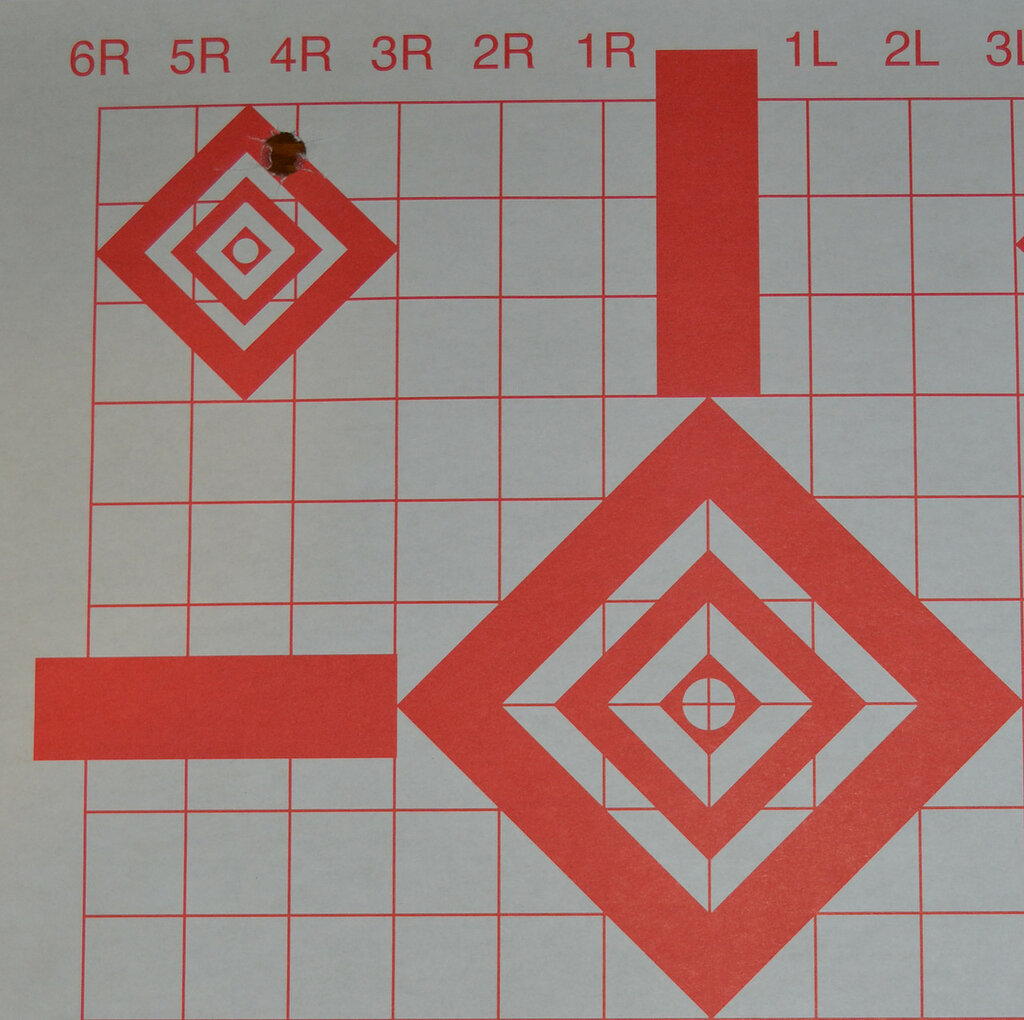 Germans may not fight well in the snow, but they do make some very accurate shotgun slugs. I was very happy to see the outstanding long-range accuracy possible with the Rottweil slugs. They offer a better level of performance than any other slugs I have used at longer distances.

All the slugs I tested earlier displayed greater accuracy without the choke and muzzle brake, often by a considerable margin. For competition the use of a choke and muzzle brake on the Vepr-12 may be desireable, but for maximum accuracy with slugs, it may be beneficial to remove them when possible. It would be interesting to do some more testing to see which muzzle device was affecting the accuracy — almost certainly it was the choke, but I cannot be certain without doing another comparison.

The slugs in this test showed much more varaibility in point of impact compared to the first test. Again, I believe this was due to the influence of the choke and/or muzzle brake. It demonstrates again how important it is to test any slugs that will be used for competition before use, as they may have a considerably different point of impact than those a shooter has used to sight in their shotgun.

Highly specialized slugs like the Sauvestre design are interesting from a theoretical point of view, but they are probably not well-suited to IPSC competition due to high cost and lack of increased performance over more conventional designs.